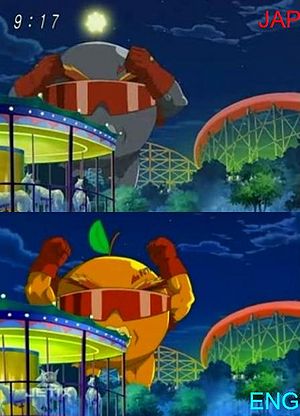 In "A Birthday Kristy Will Never Forget!" (the English dub version of "Thoma's Day Off, Exploding Bomber Nanimon"), Citramon appears at an amusement park on the night of Kristy Damon's (Daimon Chika) birthday and goes on a rampage, threatening to flood the amusement park with orange juice. Thomas H. Norstein (Thoma H. Norstein) and his partner Gaomon fight Citramon to prevent the flooding of the park and salvage Kristy's birthday. Gaogamon digivolves (evolves) into Gaogamon, throws Citramon into the air and blasts it with Spiral Blow, and Citramon explodes into a fireworks-like shower of orange juice and reverts into a Digi-Egg (Digitama).