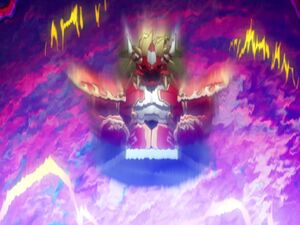 The Human Spirit of Fire

The Human Spirit of Fire was created from Ancient Greymon after his battle with Lucemon in the past. From there it passed to Ofanimon's keeping where he hid it in the City of Flame. When Cherubimon betrayed the Digital World and began his conquest of it locking Seraphimon into an endless sleep and imprisoning Ofanimon in a prison of light she was able to call Legendary Chosen to the Digital World. From them the Spirit of Fire chose Takuya to posses it and so he was able to spirit evolve into Agnimon. When Seraphimon's power was released it also gained the power to combine with the Beast Spirit of Fire to double spirit evolve Takuya into Aldamon.

(Note: Is called Spirit of Flame H in the TCG.)