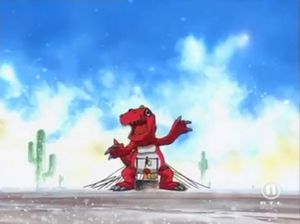 Several Tyranomon are servants of Etemon. The first one appears in "The Fairy! Piccolomon" and is destroyed by Greymon.

In "Digimental Up", a group of five Tyranomon is controlled by the Digimon Kaiser's Evil Rings. They are freed from the rings by Pegasmon and Nefertimon.

A Tyranomon was among the many Digimon seen through the rip in the sky during Vikaralamon's rampage.

A herd of Tyrannomon were seen running, and suddenly killed by Omegamon. The bunch of them were seen as a part of Silphymon's rebel group.

A Tyranomon is pictured as one of the Digimon killed by Kurata Akihiro's forces.

A Tyranomon is the evolved form of Tyumon, a partner Digimon of an International Chosen Child.

A Tyranomon is shown facing a Golemon in Net Battle.[67]

After the Player gets past Amida Forest and recruits Centalmon, it will lead to the Ancient Dino Region where the Player will be confronted by a Tyranomon that happens to be guarding the region and a battle is engaged. After Tyranomon is defeated it opens the gate and the player can access the Glacial Time Zone where time passes much slower, and starts guarding the Speedy Time Zone.

If the Player attempts to cross the Speedy Time Zone, he will be stopped by Tyranomon saying its dangerous to go there as time elapses much faster than usual, but after the Player's insistence to salvage the File Island Tyranomon is convinced to open the gate as he noticed that a meteor fell in that area and things went strange and warns the Player to be careful as their Digimon may ask for more items and may die faster. The meteor is later revealed to be an Insekimon and after a battle the Player returns to Tyrannomon, where it'll refuse to join the Village of Beginnings until a Master Tyranomon comes, scolds and orders him to join the city, replacing him as the guard of the Gate.

Tyranomon's Digivolution item is the White Fang which lets any Child Digimon evolve into Tyranomon.

Tyranomon has 4 possible evolutions depending on the stats and Care Mistakes made:

Tyranomon spits various flames out of its maw towards the enemy.

Tyranomon appears as an opponent and an obtainable Red Card.

Evolves from Agumon. Can evolve to Metal Greymon, Metal Tyranomon or Skull Greymon.

Evolves from Agumon. Can evolve to Mamemon.

Appears in Area 01 and Area 02 as a wild enemy encounter.