Taichi is an adventurous boy who acts as the leader of the Chosen Children in Digimon Adventure and the leader of the senior group in Digimon Adventure 02. He is the older brother to fellow Chosen Child Yagami Hikari, and can be extremely protective of her, just like how Ishida Yamato is with Takaishi Takeru. Taichi wears a pair of goggles, a characteristic that is shared among most of the main characters of other Digimon adaptations and is synonymous with leadership in the Digimon franchise as a whole.

As a leader, he often acts first without realizing the consequences of his actions. This has led him to moments of friction and guilt between his friends, as well as his Digimon partner, Agumon. However, he manages to do whatever is necessary to rectify the situation, and in times of need, save friends and family from certain doom.

He lives with his father, Susumu, a businessman, his mother, Yuuko, a housewife, and his younger sister, Hikari. In Adventure, they also had a cat, Miiko. Taichi is a talented soccer player, and is so good at the game that he became a regular in his elementary school's soccer club when he was just in the fifth grade. He might have had feelings for Sora as seen in A very Digi-Christmas.

When they were young, Taichi and Hikari lived with their parents in Hikarigaoka. Taichi attended Dai-san Elementary School, and was in the same first grade class as Takenouchi Sora. In 1995, they discovered a Digitama that came out of their father's PC. Before long, it hatched into Botamon and evolved into Koromon, and the two children befriended it. However, it became feral when it evolved into Agumon, and then Greymon. A Parrotmon that also crossed over from the Digital World challenged the aggressive Greymon and defeated it. However, Hikari revived it with her whistle, allowing it to overpower Parrotmon and causing both Digimon to vanish from the human world. Following this incident, which was appropriated to a "terrorist bombing", the Yagami family moved to Odaiba.

The adventurous leader of the group, Taichi was always the first to jump into action, though it often throws him into the path of danger. He soon realized to be a true leader, he must the others' confidence and use empathy rather than reckless courage.

Taichi was writing an e-mail to Sora to apologize after a fight they had concerning his birthday present to her, and accidentally put a heart at the end of the letter. Taichi's letter, however, wasn't to be received after Hikari sent it because of a strange Digimon who had appeared on the Internet. Izumi Koushiro came over to Taichi's house, and they contacted Gennai, who sent Agumon and Tentomon into the Internet to battle the rapidly evolving Digimon. Yamato, Takeru and their partners joined Taichi and Koushiro's partners in battling the Digimon, who had become Diablomon. The letters being sent to the Chosen Children to encourage them were slowing their partners down and allowed Diablomon to defeat them and escape. War Greymon and Metal Garurumon tracked Diablomon, who was rapidly multiplying, and were again plagued by the e-mails. Taichi and Yamato entered the Internet to revive their Digimon, and they jogress-evolved to become Omegamon. Taichi, Yamato and Omegamon then fought Diablomon in the Internet, destroying him at the last possible second. Taichi's e-mail to Sora finally got through, and the two eventually made up.

During May of 2000, Taichi arrived in the Digital World and gave up his Crest power to free the Four Holy Beasts. As a result, Agumon lost the ability to become Metal Greymon and War Greymon.

Taichi has grown emotionally by this time, becoming calmer and less likely to jump right into action without thinking, though he was still a soccer player. Having more free time on his hands than most of the older Chosen, he often helped out the younger Chosen Children in their quest. He was the idol of Motomiya Daisuke, who inherited the trait of Courage from him.

During the events of this movie, he was the leader of both generations of Chosen Children, though Koushiro had more of an understanding of what was going on. Taichi and Yamato went into the Internet to defeat Diablomon once and for all. After they defeated Diablomon, Omegamon blasted his way out of the Internet to fight Armagemon. The gargantuan Digimon managed to deplete Omegamon's strength and defeat him, causing Taichi to nearly lost hope until Imperialdramon came. After Imperialdramon became Imperialdramon Paladin Mode by way of the last of Omegamon's strength and defeated Armagemon. When the Kuramon started to appear following Armagemon's defeat, Taichi and the others used their Digivices, along with the spectators' cellphones, to delete the Kuramon.

Taichi has become a United Nations diplomat for the Digital World. He is married and has a son, who has a Koromon for a partner.

Taichi and Agumon, on the Watch Man's boat in DigiQuartz.

Taichi and Agumon were recruited by the Watch Man through as-yet unspecified means alongside the other five prior Digimon lead heroes and their partners; the Watch Man suggested that they were his backup plan in case no-one else successfully captured Volcdramon, and promises that "that day" in which they will take action will soon come.[6] Taichi here appears to still be eleven years old and from 1999, unusual given the additional presence of Motomiya Daisuke (also eleven years old, but from 2002).

Being seventeen years old, Taichi has grown to be more mature. He becomes less rash and starts questioning the reason and the consequence of fighting, which potentially would cause casualties and collateral damages.

Taichi is also shown to be uncertain about what he will be doing after graduation, as he has not handed his career planning form. Taichi mentions that his friends "living far away", having the Digimon in mind. His homeroom teacher, however, misinterprets Taichi's remark as his friends living overseas and advises Taichi to study languages.

During "BONUS TRACK", Wizarmon saw other universes. In one of them, he saw Taichi and Ishida Yamato riding Omegamon. 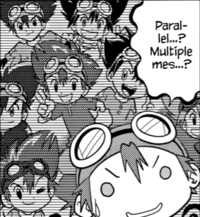 Before the events of the game, Taichi, alongside the other Chosen Children, was kidnapped by Millenniumon, causing Agumon to recruit Akiyama Ryo to save them. After Ryo defeated Millenniumon, Taichi was rescued, and then went back to his own world.

Taichi, in his Adventure design, appears at the end of the credits, telling the player that the game is not yet over.

Taichi, in his 02 design, appears in Beginner City's Battle Café after the credits roll. He asks the player if he's seen any suspicious Digimon, explaining that their boss is Vamdemon and they constantly cause trouble. The player, however, has not seen them, but promises to tell Taichi if he does.

After Vamdemon is defeated at Deserted Island, Taichi points out that he suspected he had come to the world of Digital Card Arena, but the player stopped him. He then tells the player that they should battle someday.

Taichi can be battled after clearing Beginner City's third Battle Arena. He uses the Go Now deck, a Red/Flame deck with Perfect-level Digimon and Warp Evolution cards. If talked to during this time, he'll give the player the second Digimental of their second Partner Card.

Taichi (in his Adventure design) serves as Agumon's Tamer, as well as sharing the role with Ishida Yamato (in their Bokura no War Game designs) for Omegamon. As such, he appears in the character select menu alongside his Partner Digimon and when Agumon evolves into War Greymon.

Taichi and War Greymon appear together as a collectable card.

Taichi and Yamato appear in the game's menu, representing the game's friend list.

Between Februray 7, 2020 and February 22, 2020, Taichi and Agumon appeared as part of the login promotion screen to promote Digimon Adventure: Last Evolution Kizuna.

Yagami Taichi is one of the Generals in the Super Digica Taisen card game. In one of the game's various expansions, Taichi leads the Army of Royal Knights against the Dragon Army commanded by Blue Flare's General Aonuma Kiriha.