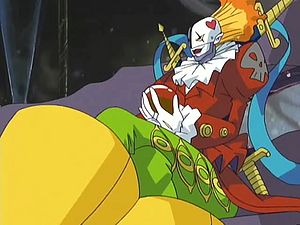 Piemon was the leader of the Dark Masters, a group of four Ultimate level Digimon born of Apocalymon's chaos. He was responsible for leading a raid on the facility from which Gennai's group operated before the Chosen Children's partner Digimon were born, stealing their Tags and Crests and hiding them throughout the Server Continent. Years later, while the Chosen Children were in the real world combating Vamdemon, he and the other Dark Masters successfully conquered and reformatted the Digital World, twisting it into Spiral Mountain. He was the leader of the Nightmare Soldiers, and his domain was a corrupt dark wasteland, though he never left the Dark Masters' headquarters plateau atop Spiral Mountain. Proving too powerful to outright kill and having repeatedly overwhelmed War Greymon and Metal Garurumon, he was instead sealed away in another dimension by Holy Angemon's Heaven's Gate.

A Piemon is the partner of Sigma. He has the ability to read all communications within his Masks Square. He was deleted and had his data absorbed by Arkadimon.

Piemon is an obtainable Ultimate level, Virus Attribute, Land Type Digimon. Like all bosses, it can only be obtained in the post-game.

Piemon appears in Infinity Tower's Battle Cafe after Izumi Koshiro, and therefore, all the Adventure Chosen Children, have been beaten by the player. In it, he tells the player that he looks energetic, and is then questioned by the player on what he's plotting. Piemon answers that he isn't plotting anything, and that a kid like him couldn't understand as he's trying to give the world something that it's missing. He then tells the player to come to his Arena if he wants more information, promising he'll learn all he wants. This reopens Infinity Tower's Battle Arena, which has otherwise been closed since "A" was defeated.

Piemon is the last opponent of Infinity Tower's third Battle Arena and the second of the fourth and fifth. Before the first battle, he congratulates the player on getting to him but also says he'll stop him there, as while he's generous to kids, he doesn't want the player getting in his way. He tells the player that the world is missing true evil, and that's what he is. Furthermore, the player reminds me of some children he met in the past, so he'll destroy him. Piemon plays the Four Heavenly Kings Assault deck, a Blue/Water, Black/Darkness and Yellow/Rare deck with 5 attack, 3 defense and 3 evolution speed that's full of Dark Masters. Upon being defeated, he exclaims that he can't believe another kid has foiled his plans, but he'll return and his ambitions will never cease, so their battle will continue forever. The Battle Arena closes down again afterwards.

After clearing Infinity Tower's fifth Battle Arena, Piemon can be fought in the Battle Cafe. Beating him five times in a row will award the player the Dark Sevens card.

Piemon is an enemy Digimon. It is a collectable black card with 42/40 stats.

Can be evolved from Etemon if above level 45 and Spirit above 190.

Piemon is an obtainable mercenary Digimon which evolves from Fantomon at Lv 41 and can further evolve into Chaos Piemon at Lv 65 with the item Trump Sword.

Piemon is the boss Digimon of Area 07 and is available to be-friend upon victory.

Can be evolved from Vamdemon with 0 Calls, Perfect Level Requirements.