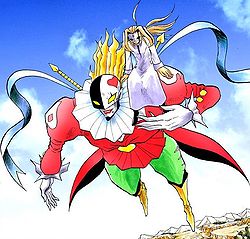 Sigma is one of the Alias III, having exuberantly joined Saiba Neo with the hopes of creating a new world. He wears a mask and speaks by typing out words and projecting what he wants to say in a synthesized voice. Sigma was very quiet, often being teased in school, and his only friends having falsely befriended him just so he would do their homework. However, being lonely he went along with the facade. Eventually he discovered "chat" on the net, and that by putting on a mask and alias, he could say whatever he was feeling or holding back in real life and truly be himself. Despite his original distance from other people, it is shown he really does care for his partner, a Piemon.

During the course of Sigma's adventure in the Digital World, he realizes that he shouldn't just run away and hide from his problems, as he does when using chat. Afterwards he becomes friends with the other tamers.

When Neo brings up the subject, Sigma volunteers to fight Taichi quickly, promising Neo he will defeat him. He creates Masks Square, a place where he can warp things to move them instantly as well as read Taichi's uplinked commands. Taichi sends commands for Zero to move, and Sigma warps Piemon's Trump Sword accordingly. As Zero slows down, he and Taichi exchange a look, and Taichi sends a fake command for Zero to move 10 meters ahead. Not looking at the situation, Sigma warps the Trump Swords 10 meters ahead... into Piemon. Zero then is able to beat Piemon, but before he kills him, Sigma screams for Zero to stop and admits defeat, for the first time speaking in his own voice instead of through the computerized one. On the way back, Piemon asks why Sigma didn't let him fight until the end, and Sigma says even when everyone else shunned him, Piemon, his partner, was always there. When they arrive back at their headquarters, Neo orders Arkadimon to kill Piemon and absorb his data as Sigma watches in horror.

After this, Sigma is quiet until Hideto says he is going to convince Neo that what they're doing is wrong, upon which Sigma agrees. When Neo says he has used them, the Alias III begin to fight him. With Piemon gone, Sigma analyzes the data as the other two are fighting, and along with Gotojuki Mari, sends Hideto and Omegamon away to warn Taichi. After he is imprisoned by Neo, he sneaks into the lab to do an analysis and comes up with a weakness to beat Arkadimon. He puts the data on a card and sends it to Taichi with Saiba Rei.

Due to Sigma's partner, he likely owns a Pendulum 3.0.