Digimoji[1] (デジ文字 Dejimoji, lit. "DigiLetters"; Dub: DigiCode) are a collection of logographic symbols used in the Digital World that represent both the list of kana and the English alphabet. 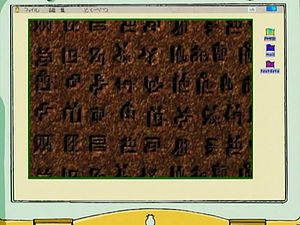 In episode 38, Gennai contacts Kōshirō via e-mail regarding how to defeat Vamdemon including an prophetic inscription found in ancient ruins with Digimoji present on it (in the form of a compressed file attachment), this is intended to be translated as:

Although in reality the stone actually depicts random Digimoji characters, on the stone, this would appear as:

In episode 49, at the Numemon-enslaving factory led by Waru Monzaemon, there is a Digimoji inscription seen on each of the two domes which reads " 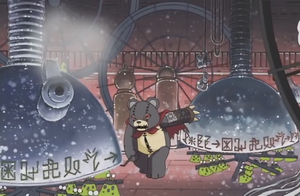 In episode 12, Sora asks Starmon whether or not he has seen Piyomon and in response to her description, Starmon brings up multiple wanted signs written in Digimoji. The legible part of the sign reads:

This is derived from a tanka, found in the Kokin Wakashū, that Emperor Kanmu recited to a woman whom he had once admired named Kudara no Konikishi Myōshin (百済王 明信), wife of statesman Fujiwara no Tsuginawa, during a banquet in 795. The tanka reads: 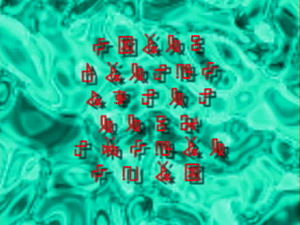 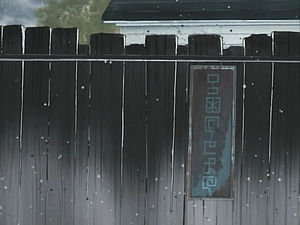 In the opening title of episode 13, a column of Digimoji appears displaying the following:

This translates to "Ph'nglui mglw'nafh Cthulhu R'lyeh wgah'nagl fhtagn" (フングルイ ムグルウナフ クトゥルウ ルルイエ ウガフナグル フタグン), an occult phrase from H. P. Lovecraft's The Call of Cthulhu which means "In his house at R'lyeh, dead Cthulhu waits dreaming". Later, when Hikari is alone, she walks past a sign that reads 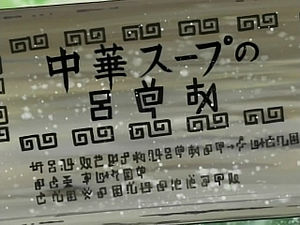 Later, in episode 36, the children discover a spring that naturally gives forth soup, but fail to read the sign warning them not to drink it.

The Digimoji translates to "中華スープの泉: 聖なる中華な泉のスープを無断で呑むことを禁ず無断で呑んだ者は罰する", so in English the sign would be read as "The Chinese Soup Spring: It is forbidden to drink the soup of the sacred Chinese Spring without permission and those who drink it without permission will be punished." 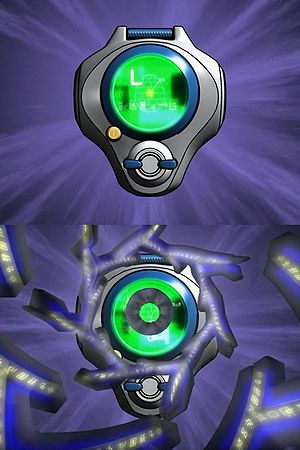 When the Tamers use their D-Arks to evolve their Digimon to the Adult level, Digimoji are displayed which reads:

shown vertically to the left of the screen, hence they would translate as "Evoluti—" and "—tion" respectively. Also, during that moment, they are surrounded by a "cocoon" of Digimoji which repeatedly displays a random sequence of letters (

), reminiscent of movies with a cyberspace theme, in which random characters appear everywhere as well as flowing with the digital theme of Digimon Tamers.

In episode 33, Shaochung enters the Digital World and appears at the "Great Southern Gate" directly above an engraving in the ground which reads:

— "Zhuqiaomon" (スーツェーモン Sūtsēmon). However, unlike other Digimoji, this is displayed in the manner of how it would appear in Katakana, so it appears as:

In episode 35, Takato's D-Ark is destroyed as a result of Guilmon becoming Megidramon and he receives a new gold and white D-Ark in its place. This displays Digimoji on the golden outer rim of the screen which reads:

In Episode 14, the following sequence of Digimoji is shown on the bottom-left corner of Bolgmon's display, repeating itself while charging up to attack Grottomon with Field Destroyer: 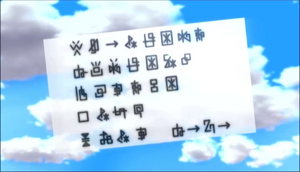 After confronting War Greymon X, Omegamon is contacted by Dukemon via a video message written in Digimoji, this reads:

Digimoji is the official language of the Digital World[3].

It can be seen during Evolution sequences, Digital Dives and is also displayed on both DATS's computer screens and Thoma's handheld laptop.

In the first opening, during the scene where it shows various views of action at the DATS Headquarters, the following Digimoji are displayed on the top rows, along with lateral inversions on the bottom rows:

Also, during the scene where it displays the evolutions of the three main Digimon, the English Digimoji along the top of the screen displays the following:

Bottom 2 rows for all three:

When Masaru and the others revisit Wanderer's Cape, they came across a mysterious building that had a sign with Digimoji on it, reading

During a flashback of Kurata finding Belphemon's Digitama inside a chest sealed by a sheet written Digimoji, which lay hidden within ancient ruins in the Digital World. These Digimoji read:

There were also Digimoji on the wall outside this chest, but it was merely a table of the entire Digimon alphabet, arranged in Japanese yokogaki.

When Yggdrasill went berserk and began calling itself the "WIZ9000 Computer", random sequences of Digimoji appeared on its facial display.

In "Agumon! Gaomon! Lalamon! Explosion! The Off-screen Last Battle!", Gaomon states that both he and Thoma are fluent in Digimoji, which is one of the 170-plus languages that they have mastered. When watching clips of their previous battles, Gaomon reads the Digimoji on the Digisoul Dojo sign. Agumon is shocked that Gaomon understands it, and the latter is surprised by the former's illiteracy despite being a Digimon. 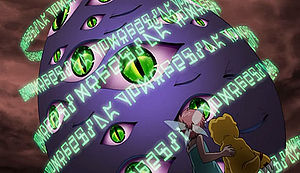 When Dark Knightmon constrains Nene using a Blossomon and tortures her in attempt to separate her from Shademon, several ofuda are attached and have Digimoji displayed on them. The first two ofuda that appear read

The Digimoji written on the other ofuda (displayed below) also reflect this, as these translate as the names of the main protagonists of the aforementioned games in addition to other female characters that appear in those games. 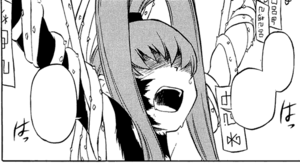 Finally, four different words appear during the end of the torture. The Digimoji for these read

(減った Hetta), which translate collectively as "I want to eat some ice cream, I'm hungry"[4].

Wizarmon casts a spell using Digimoji that disguises the Xros Heart members as humans and animals. The spell reads

In order to counterattack Shoutmon X7, Lilithmon casts a magic circle. Part of the inner circle has Digimoji reading

In a flashback of how Bagramon came to be, he is shown in front of the remains of Yggdrasill, the tree of information. There were various Digimoji-inscribed stone pillars within the vicinity; the one directly in front of Bagramon read: 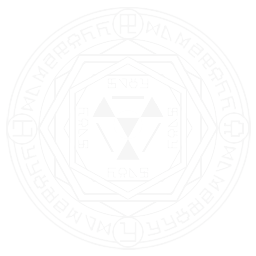 It also appears during evolution, however this is merely random sequencing of letters, for example "dfslkfghh" (

Said by Yuugo's ghost right before the Eater boss fight:

Written on the symbol that transports you to the Digital World:

In the main case "Mysterious Digital Face's Treasure", received in Digivice from Date: