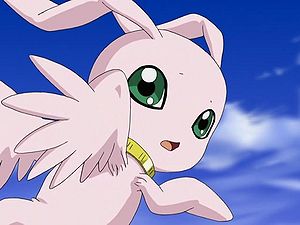 Kenta and Marin Angemon were shopping for presents for Ruki's birthday party when news about Locomon came on TV. During the battle against many Parasimon, Marin Angemon destroyed a few of them.

Marin Angemon is the digimon partner of Kitajima Ami. He carries the DigiMemory of Water. He was integrated into the body of NEO.

Marin Angemon is a collectable blue card with 10/10 stats.

Can be evolved from Angewomon if above level 48 and Spirit above 215, or can be found at Underwater Drive, via Freezing Mountains.

It also appears as a boss Digimon at the Underwater Drive.

Evolves from Lilimon at level 41

Marin Angemon is an obtainable Digimon which is evolved from Angewomon or Mega Seadramon. It can also be obtained as a collectible card. Its card is part of the Holy Ring (ホーリーリング Hōrī Ringu) set.

Marin Angemon is the partner Digimon of Nogi Yuu.

Can be evolved from Zudomon or Whamon Perfect with No Calls, over 60% Win Ratio.

Can be obtained by using the "Marine Extract" item on any Digimon Child level or above.