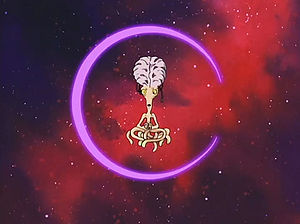 A Vademon worked as a fortune teller at the Fortune Teller Village while other Vademon were seen at Akiba Market and the Great Trailmon Race.

A Vademon was seen in a glass tube inside the room where Thoma's sister, Relena was.

One Vademon is part of Tobari Ren's collection.

A Vademon is one of the Digimon who cheer the heroes on in the final fight against N.E.O[34].

Vademon from Digimon World. The replacement of its tentacles with its UFO is due to the difficulty of rendering with the graphics of the time.

In the Mount Panorama, on the eastern screen you'll find strange circle marks in the floor. If you come to the same screen once in a while, there's a chance that more and more of the circles will start showing up in the floor. After the third circle is shown, a Vademon will come and will be convinced by the Player to join the Village of Beginnings peacefully, with no intentions of battling. Vademon joins Meramon, Tyranomon, Yukidarumon, Garurumon and Digitamamon in the Restaurant, cooking special alien dishes such as Space Salad, UFO Soup and Galaxy Course that raise your Digimon's stats.

All 29 Adult (30 including the Japanese exclusive Panjyamon) Digimon in the game can evolve into Vademon, this is triggered when your Digimon is at least 15 days old and has a Discipline below 50%. If you scold it, it will automatically evolve into Vademon though its not guaranteed as this only has a random 50% chance of happening. This is useful to extend the lifespan of your Digimon for more or less 5 days if it hasn't evolved yet. Vademon's Digivolution item is the Ray Gun which lets any Adult Digimon evolve into Vademon.

In the arena, Vademon can participate in the Version 2 Group, and appears as an opponent in the Nature Cup, Metallic Cup and Humanoid Cup.

Vademon appears with Octmon and Gesomon in the CODE Domain, Laser Domain, Diode Domain, Scan Domain, Patch Domain, Soft Domain, RAM Domain and finally, Core Tower. Vademon also fights as a boss in Laser Domain with Cyclomon and Tuskmon, and in the Data Domain with Phantomon and Vamdemon.

Vademon appears in the Rare card group as a Perfect level. Enemies use Vademon's card in the Who Are You? Deck.

Tamer George uses Thunderballmon and Vademon to fight you at Bulk Swamp, in the South Sector as well as this, a Royal Guard member uses a red variant of Vademon, along with a Mugendramon and a Whamon.

Vademon also appear individually as an enemy in the Mobius Desert, where in the Asuka Server they can drop Bolt Power 1, in the Ameratsu Server, the red variant appears and can drop Cursed Puppet.

Vademon is an obtainable Virus Perfect-Level Digimon and belongs to the Nightmare Soldiers Field. While Vademon doesn't evolve from any Digimon, it evolves into Ebemon.

A Vademon, along with a Parasimon and a Moon Milleniumon, appears as an opponent sent by one of the Tamers that ascend you to the Silver Rank if you defeat them.