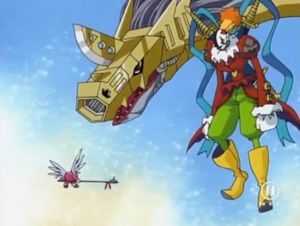 Metal Seadramon was one of the four Dark Masters that conquered the Digital World while the Chosen Children were in the Real World fighting Vamdemon. He ruled the oceans.

A Metal Seadramon was seen through the rip in the sky during Vikaralamon's rampage. Another one was among the Ultimate digimon that evolved because of Culumon's shining evolution to fight against the D-Reaper.

Appears in "Loss" in a flashback together with the other Dark Masters. Later the reborn, infected Metal Seadramon was summoned by the Mysterious Man to chase the dispersed Chosen Children. However, it was defeated and killed by War Greymon and Metal Garurumon.

A Metal Seadramon is part of the group defending Bagramon's Palace in Jupiter Zone.

Can be evolved from Mega Seadramon if above level 41 and Water EXP above 6000, or can be found at Underwater Drive, via Freezing Mountains.

Can be evolved from Mega Seadramon if above level 55, Machine EXP 10000, and Water EXP above 11000, or can be found at Macro Ocean. Also appeared as a boss character during Ebidramon's Quest Mission, looking forward to challenge you in a Macro Battle. Once beaten, he's satisfied challenging you and give you a DigiMarine.

Metal Seadramon can only be obtained as a collectible card. Its card is part of the Crack Team (クラックチーム Kurakku Chīmu) set.

Metal Seadramon is the boss Digimon of Area 05.

Metal Seadramon is an enemy Digimon in Area 07.