From Wikimon
(Redirected from Digimon Dictionary)
Jump to: navigation, search 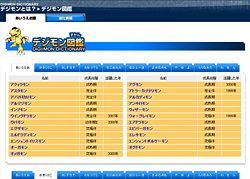 The Digimon Reference Book (デジモン図鑑, Dejimon Zukan), previously named Digimon Dictionary, is a subsection of Digimon Web focused on providing both the official names and profiles of Digimon which include ones that were never released on any of Digimon Web's other subsites or in general. The site was launched on June 25, 2007, the eve of the Digimon 10th Anniversary. and has since been usually updated every week with the addition of two new profiles. However, since April 6, 2012, only one profile has been added a week. Exceptions were made on both December 7 and 14 of the same year, when two profiles were added at once each time.

As of September 18, 2020, there are currently 1002 Digimon pages available on the Digimon Reference Book.

Profiles are categorized in two different ways and can be viewed accordingly upon the viewer's preference. They are listed alphabetically, subdivided into ten sections. This system is also incorporated in the URL of a Digimon's page:

Tabs listing pages alphabetically (left) or by evolution stage (right) located at the top-left of the page.

They are also listed by evolution stage:

Example of a newly released profile at a particular time (Tyumon, December 9, 2008).

When new profiles are added, they are indicated by having the word "NEW!!" temporarily placed to the left of a Digimon's name until a new set of profiles are unveiled. Originally, there was also a field that listed the year a Digimon was active from 「活躍した年 katsuyakushita nen」, however although there were a few Digimon listed with given dates, namely those that were added near the time of Digimon Reference Book's opening, this seemed to cease when newer, more recent profiles were released. With Digimon Web's revamp in June 2010, the year field was removed entirely.

Digimon names labeled with the X-Antibody affix retain the same name as their counterparts, labeled merely for distinction and not amalgamated into its main name - e.g Greymon X-Antibody's name is "Greymon" as opposed to "Greymon X-Antibody". Similarly, the same situation applies to the majority of recolors, i.e those of subspecies, and level changes.

While the majority of the images are displayed in high quality, with a standardized size of 320 x 320 pixels, for a brief time - between April 18 and June 6, 2008 - there were a number of images released that were below the current standard. Although the quality of images released prior to this returned to normal, with the exception of five pages (Labramon, Ancient Volcamon, Giga Seadramon, Vademon (X-Antibody), and Zudomon), the remaining low quality images still exist on their pages.

The profiles of Digimon whose counterparts are affected by the X-Antibody retain the format of pages displayed on the Pendulum X site. The overall profile is a combination of the original profile of the precedent followed by its own.

Following the 2011 Tōhoku earthquake and tsunami, a few profiles were shortened. More specifically, all mentions of earthquakes and tsunamis were removed. Independent of that, information has also been removed from some other profiles, such as translation aids for attack names. See Digimon with updated profiles on Digimon Reference Book for a list of altered profiles.