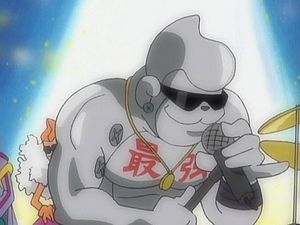 After Etemon was seemingly defeated by Metal Greymon he returned for revenge later in the series after having evolved into Metal Etemon. He appeared intending to attack Jou and Mimi, but ended up fighting Pinocchimon instead allowing the children to escape. After Pinocchimon becomes bored of their fight, Metal Etemon resumes his search for the Chosen Children. When he finds them Leomon evolves to Saber Leomon to fight him along with Jou's Zudomon. Zudomon used Hammer Boomerang to shatter part of Metal Etemon's body so that Saber Leomon could use Nail Crusher to defeat Metal Etemon. They succeed, but not before Saber Leomon had taken a fatal blow protecting Mimi leading to his own deletion.

While Metal Etemon does not appear in the game naturally, it was offered as a special raffle prize event in Japan only[26], its also possible to obtain it via Game Shark and cheat codes, as it appears as a Perfect-level Virus type Digimon in Digimon World.

Metal Etemon cannot be obtained in any natural way in the game aside from the prized Memory Card but inner data found that its also obtainable via its personal Digivolution Item, the Metal Banana, which can be acquired via cheat codes, which if given to any Adult level Digimon, it will automatically evolve into Metal Etemon. Other Digimon are obtained in a similar way, those being Panjyamon and Gigadramon.

Metal Etemon is a Perfect Black Card in this game.

It's a random enemy, can be found at Amaterasu South Badland.

In the upper floor you find Metal Etemon, this shop functions of a different way, every time you talk with Metal Etemon he is going to ask a certain amount in Bits for concoct a new article, after a time you can check which articles that he concocted, every time you deliver the amount requested by the Metal Etemon in the approximative time that converse with him the increased amount, for each quantity you deliver he is going to concoct a more powerful article.

Metal Etemon is an obtainable Digimon. Can be evolved from Etemon if you win 14,Have 50 Virus-AP and 50% Wins.

Metal Etemon is an obtainable Digimon which is evolved from Andromon or Etemon. It can also be obtained as a collectible card. Its card is part of the Metal Digimons (メタルデジモンズ Metaru Dejimonzu) set.