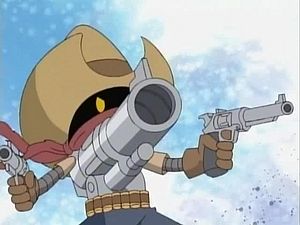 Revolmon as seen in "Digimon Adventure 02" 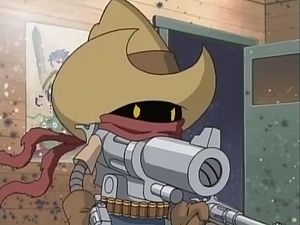 Revolmon as seen in "Digimon Adventure 02"

After the Chosen Children were captured by Starmon under the control of an Evil Ring, Revolmon set the girls free to play cards with them (he thought the boys would cheat). Starmon soon finds out about this and chases him down and they have a duel. But Revolmon cheats and turns around before the last shot and shoots Starmon. He keeps shooting at him making him dance about until he runs out of bullets. Starmon uses his Meteor Squall attack and knocks Revolmon out. When Revolmon wakes up the battle is over so the first thing he thinks of is to ask everyone to play another game of cards.

Several Revolmon tried to defend the forest that Kurata and his troops set aflame, but they were all deleted by Gizmon.

Revolmon is a member of Xros Heart.

A Revolmon is shown as one of the inhabitants of Light City in Trailmon's sightseeing guide.[38]

Revolmon is available as a Digimon Medal.

Revolmon is available as a Digimon Medal.

Evolves from Toy Agumon or Kokuwamon. Can evolve to Metal Greymon or be Jogressed with a compatible Digimon to get Andromon or Big Mamemon.

Evolves from Toy Agumon or Kokuwamon. Can evolve to Metal Greymon or be Jogressed with a compatible Digimon to get Cyberdramon or Big Mamemon.

Revolmons pistol design was changed into a blue color and the bullet chamber was filled with a yellow glow in the english dub of Digimon Xros Wars.