From Wikimon
(Redirected from Akiyama Ryou)
Jump to: navigation, search

Akiyama Ryo is a Tamer who starred as the protagonist of a series of Digimon video games for the Bandai WonderSwan and made several cameos in the Digimon Adventure anime series before becoming a protagonist of Digimon Tamers. 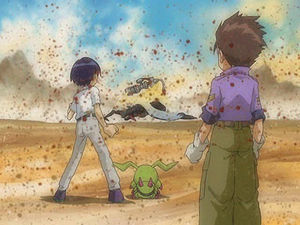 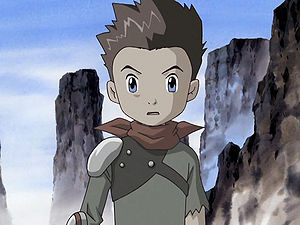 Ryo Akiyama appears in an omake of the manga.

On Christmas Day, 1999, Ryo is summoned to the Digital World by Agumon who begs for him to save the Chosen Children who have been kidnapped by Millenniumon who has also revived their past enemies. After a series of fierce battles, and rescuing the majority of the Chosen Children he prepares for his final confrontation with Millenniumon, to save Yagami Taichi. He succeeds and after bidding his friends a tearful goodbye, he returns home.

Ryo and Ichijouji Ken are watching the events of Digimon Adventure: Our War Game online when they are alerted by V-mon that another Diablomon has appeared in the Digital World. Ken and Ryo head to the Digital World where they learn that Diablomon is simply a trap set by Millenniumon who had survived his initial battle with Ryo. Ken meets his own partner, Wormmon, when he and Ryo are separated and the two go on separate adventures attempting to rebuild the Digimentals. Once completed, Ryo battles Millenniumon and once again, he succeeds in defeating him. However, in his last moments he sends out his Dark Seeds and aims them at Ryo. Ken shoves Ryo out of the way and takes a Dark Seed in the neck which would eventually lead to his transformation into the Digimon Kaiser.

While Ken remains sick in bed, Ryo is once again invited back to the Digital World, this time, for a Digimon tournament in which the winner would receive one of the Four Holy Beasts as a partner. After battling Izumi Koushiro, Wallace, Tachikawa Mimi, Ishida Yamato, and Taichi it is revealed to have been a scam to train Ryo to prepare him for yet another battle with Millenniumon. Betrayed Ryo becomes mute and heads in for his battle. Though he succeeds, Millenniumon offers Ryo the chance to come with him through time and detonates his palace. Ryo disappears and Ken continues to hope to one day meet with him again[N 1].