After Thoma betrayed Kurata and destroyed the device for controlling Belphemon: Sleep Mode, Kurata digitized himself and merged with it, causing his clock to ring and awaken as Belphemon: Rage Mode. He was easily defeated by Shine Greymon: Burst Mode.

A Belphemon: Rage Mode is one of the many Virus Digimon spawned by the polyhedron. Due to the power difference between it and Greymon, it was completely unfazed by the latter's Mega Flame and was able to take it down in one move with Gift of Darkness. However, it was beaten in one shot as well thanks to Zeromaru's V-Wing Blade. 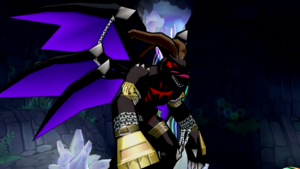 Appeared as one of the Seven Great Demon Lords. He is the first Demon Lord boss and is an obtainable evolution of Agumon.

Belphemon: Rage Mode is an available Burst Mode Evolution for Belphemon: Sleep Mode.
It can be unlocked if level 70 or above with the item Alarm Clock.

Belphemon can only be obtained as a collectible card. Its card is part of the Seven Great Demon Lords (七大魔王 Nanadaimaou) set.

Can be obtained as a Burst Evolution of Mammon, or by using the ??? item on any Digimon Child level or above. Can Burst Evolve into Lucemon: Satan Mode.