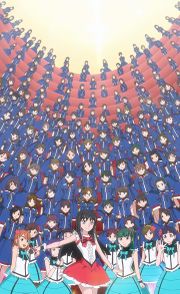 Appliyama 470 (アプリ山４７０, Apuriyama Yon-Nana-Maru; lit. "Appli Mountain Four-Seven-Zero") is a popular idol group that appears in Digimon Universe Appli Monsters. Launched by L Corp[1], the group consists of 470 members who each represent a different app; Karan Eri is the most recent member. The group also coined the catchphrase "There are as many idols as there are apps" (アプリの数だけアイドルがいる, Apuri no kazu dake aidoru ga iru), an analogue to the slogan "There are as many monsters as there are apps" used for Appmon. Although the group's uniform comprises a blue dress with a yellow star on each sleeve, socks with a yellow star on each, and brown shoes, each member wears a variation of the uniform. The group is a reference to idol group AKB48.

Each member is ranked from 1 to 470 based on the results of an election.