From Wikimon
(Redirected from Floramon (Adventure))
Jump to: navigation, search

Catherine is a minor character in Digimon Adventure 02.

Catherine is a French Chosen Child, partnered with Floramon. 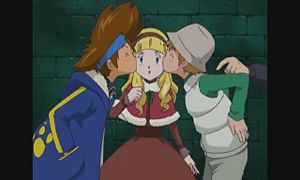 In "Coral and Versailles, The Battle Royal!" Cathrine and her Floramon tried to destroy a Dark Tower in the Seine River but was ambushed by Giromon and taken hostage by the Mamemon brothers (Mamemon, Big Mamemon, and Metal Mamemon) who were indulging in wine in the Palace of Versailles. Taichi, Agumon, Takeru, Patamon, and Michel arrive at the palace after noticing that the front gates were left open and the guards were missing. After some pie throwing Agumon and Patamon evolve to Angemon and Greymon to take the fight with the Mamemon brothers outside by smashing threw the wall. Taichi and Takeru free Catherine and make it no secret that they both are attracted to her. After she explains how she was captured they run outside to aid their Digimon who began losing after Giromon arrived to aid the Mamemon brothers. Catherine evolves her Floramon to Kiwimon to defeat Mamemon as Taichi and Takeru evolve their Digimon to Metal Greymon and Holy Angemon. The Mamemon brothers and Giromon retreat and are chased back to the Dark Tower in the Seine River where Metal Greymon shot them down while Holy Angemon destroyed the Dark Tower.

Taichi and Takeru celebrate by giving her a kiss on her cheeks at the same time before Michel demonstrates the proper way by kissing her hand.

In "Our Digital World" she is among the Chosen Children of the world that break Belial Vamdemon shroud of darkness and goes to the Digital World to blind him with the light of their Digivices.