When Lucemon Falldown Mode is beaten in the Dark Area and scanned by Susanoomon only his holy data is scanned. His dark data appeared as a black Digitama and absorbed the Dark Area to become Lucemon: Satan Mode who now carried a miniature version of the Dark Area (Gehenna) with Lucemon Larva inside it. He continues with his plan to reach the Real World. When the Legendary Chosen try and fight him he just heals and continues on. Susanoomon comes again and tries to fight him but Lucemon: Satan Mode just blasts him away with Purgatorial Flame attack. But when all of the Legendary Chosen combine into Susanoomon and fight him again just when he was reaching the Real World they drag him back to the Digital World. He tries to kill Susanoomon with Divine Atonement but Susanoomon survived and broke into Gehenna and knocked Lucemon's true form residing inside, out of the sphere, destroying the Dark Area causing Lucemon: Satan Mode to go berserk, so Susanoomon finished him off. But Lucemon's true form lived on as Lucemon Larva. 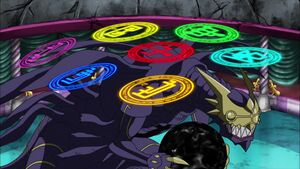 Lucemon Satan Mode from Digimon Xros Wars, depicted with the Crowns of the Seven Deadly Sins

Lucemon: Satan Mode is an available Burst Mode Evolution for Lucemon: Falldown Mode.
It can be unlocked if level 70 or above with the item Gehenna.

Lucemon Satan Mode appears as the final boss in the Scheme of the Demon Lords chapter (策謀の魔王篇 Sakubō no Maō-hen). It can only be obtained as a collectible card. Its card is part of the The Strongest and Wickedest Demon Lords (最強最悪の魔王 Saikyō Saiaku no Maō) set.

Can be obtained as a Burst Evolution of Beelzebumon or Belphemon: Rage Mode.