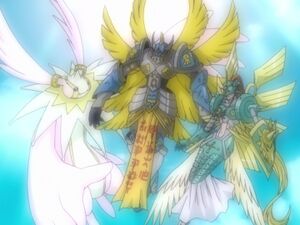 The Three Archangels from Digimon Frontier.

The Three Archangels (三大天使 "Sandaitenshi"?) are a group of Ultimate level Angel Digimon who are charged to protect the central Kernel of the Digital World, the domain of God, and to lead its Army, though each of them has a unique secondary duty.[1] They are sometimes allies of the Royal Knights.[2]

Because of the extreme of being positioned near the ultimate "Goodness", they each have another side that easily dyes their body with the other extreme of "Wickedness":[3] Demon and Black Seraphimon is said to be a fallen Seraphimon,[4] Lilithmon and Ofanimon: Falldown Mode are fallen Ofanimon,[5][6] and Cherubimon (Vice) is a fallen Cherubimon (Virtue).[7] The Fallen Archangels, Black Serphimon, Ophanimon: Falldown Mode & Cherubimon (Vice), are forms taken by the Three Archangels when negative emotions sprout, swelling day by day and making them fall to darkness. Should they fall further, it's said they would become Demon Lords. If the Three Archangels fall, new Digimon will be chosen to become them and evolve to replace them.[8]

The Three Archangels were created to face the rebellious Son of God, Lucemon.[2] When he descended to the Ancient Digital World and instigated a conflict between good and evil,[9] God divided three of its own aspects and gave one to each of his three apostles, The Three Archangels, who would be in charge of directing God's Army in order to fight against all the Fallen Angel digimon. These three apostles were: the highest ranking among the "Male Angel" digimon, who became the absolute guardian of the order and justice of God, Seraphimon; the database who holds the vast knowledge of God, Cherubimon, who is also the highest ranking among the "Holy Beast" Digimon; and, embodying the deep love of God, the symbol of the existence of the Female Angels, Ofanimon.[2] It is said that Lucemon's abilities have now been inherited and split among the Three Archangels.[10]

Though this group is not specified to exist in Digimon Adventure:, P-053 and P-054 state that Ofanimon and Seraphimon are members of the Three Archangels. This presumably means Cherubimon is as well.

The Three Archangels appear as a collectable card set.

Ofanimon appears in the Scheme of the Demon Lords chapter (策謀の魔王篇 Sakubō no Maō-hen) guiding the protagonist through putting an end to Barbamon's plans. Seraphimon appears later in the same chapter, to help the protagonist to weaken Lucemon: Satan Mode before the final battle.

The Three Archangels besides appear as a collectable card set.

After Aiba collects all of the Three Archangels medals, the Medal Man rewards them with and INT Attach A, a CRT Attach A, and a Full Revival Spray x 3.

After Keisuke collects all of the Three Archangels medals, the Medal Man rewards him with an INT Attach A, a CRT Attach A, and a Full Revival Spray x 3.