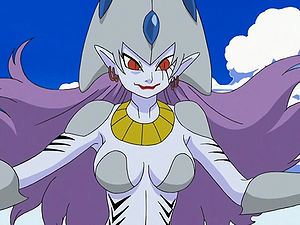 When Ranamon finds the Beast Spirit of Water she slide evolves into Calamaramon. Ranamon abandons a fight with Izumi as Fairimon to retrieve the Beast Spirit of Water. As Calamaramon she battled Fairimon more but when she attempted to make the final blow with her Titanic Charge attack she loses control and, due to her tentacles spinning, she takes off like a helicopter and flies into the horizon.

Ranamon appears and fights Fairimon once more in the ocean but when Izumi discovers the Beast Spirit of Wind and evolves into Shutumon. Ranamon becomes angry and slide evolve into Calamaramon. She spits at Shutumon a few times with her Nero Corso attack but Shutumon is fast enough to avoid it, so she aims at the other heroes, helpless on a small wooden raft. Shutumon intersects the attack receives some injury to her wing. Calamaramon attempts her Titanic Charge attack once more but again loses control and flies off.

Ranamon once again slide evolves into Calamaramon after capturing Junpei, Tomoki, and Izumi and Kouji arrives to rescue them. She and Mercuremon beats up on him for awhile until Takuya shows up and helps. After freeing the others Mercuremon disappears and Calamaramon is forced to retreat by sliding down the side of a mountain.

Inside Sephirothmon Ranamon slide evolved into Calamaramon to fight Izumi once more. She masters her Titanic Charge attack but is still defeated and both of the spirits of water are scanned.

Calamaramon is only obtainable as a collectible card. Its card is part of the Five Evil Warriors Beast (悪の五闘士ビースト Aku no Gotoushi Bīsuto) set.

Calamaramon is available as a Digimon Medal.

Calamaramon is available as a Digimon Medal.