From Wikimon
(Redirected from XW01)

A mysterious army, consisting of several Mammon, Rhinomon and Valvemon among other Digimon, advances through a desolate plane. Off in the distance, Taiki leads a Digimon army with himself as its "General" against that army. At his command, he performs a Digi Xros on Shoutmon, Ballistamon and Dorulumon into Shoutmon X4, effortlessly taking out most of the opposing army. A Greymon appears from out of nowhere and attacks Shoutmon X4. Suddenly, Taiki wakes up realising that it was all just a dream.

Meanwhile, Akari talks on her phone to Taiki's mother asking where Taiki is and then rushes off to find him. Elsewhere, Taiki takes part in a basketball game against Shinonome Central Middle School. He appears to use a “move” called “Super Miracle Shot” in attempt to score, but instead uses it as a diversion to pass to another teammate, who scores the winning basket for Shinonome East Middle School. Exhausted, Taiki passes out until Akari jumps in with a pillow to prevent him from smashing his face on the floor.

After recovering, Taiki is then approached by Tsurugi Zenjirou, the No. 1 middle school kenshi in Kōtō, and doesn’t seem to recognize him much to Zenjirou’s annoyance. He has been trying to track Taiki down ever since he was beaten by him, an amateur at the time, during a certain kendo tournament in order to set the score straight. As Akari and Zenjirou get into an argument, Taiki hears a melody along with a mysterious voice, turning out to be that of Shoutmon, saying that he will die very soon and asking whether he can hear him. When Taiki tries responding to him, a strange phenomenon occurs in which a car crashes into a multi-storey building. Somehow, neither the car nor the building were damaged in any way. Just as witnesses attempt to capture the event on their phones, an electrical disturbance occurs causing the phones as well as other electronic devices in the vicinity to temporarily malfunction. By listening to Shoutmon’s warning telling him to jump out of the way, Taiki, Akari and Zenjirou narrowly escape the car from falling on them.

Taiki notices a red light in the distance and runs towards it. After picking it up, Taiki trying replying to it, saying that he can’t leave him behind. After having a small conversation with Shoutmon, an intense blast of light appears in front of Taiki and the others, and as he walks towards the light, he sees a mysterious device floating. Another voice, different to Shoutmon’s, asks him if he wants to save the “melody’s life” and after a positive response, the voice then asks for his name. When Taiki shouts his name, the device changes from silver to red in color, and then the voice instructs him to use that device, called a Xros Loader. Akari tries to prevent him from touching it, but as soon as Taiki grabs hold of it the melody’s data is absorbed by the Xros Loader and the trio are hurled into a wormhole-like digital space, transporting them to another world, the Digital World.

Once there, a Mammon appears behind them trying to stomp on them. After being joined by more Mammon as well as Pteranomon, an enraged Digimon dashes on top of the Mammon towards where Taiki and the others are, Mad Leomon. Both shocked and irritated by their presence, Mad Leomon approaches the three humans saying that he will cleave them, extending his nails while doing so. However, a mechanical beetle-like Digimon, Ballistamon emerges from ground protecting Taiki and the others by using his Horn Breaker attack, and is soon joined by Starmon and Pickmons. Shoutmon speaks to Taiki from within the Xros Loader saying that those Digimon are his companions and then tells him to shout out “Reload” in order to release him from the Xros Loader. As Shoutmon emerges and summons his mic, Meo Leomon orders a group of Pteranomon to attack him. After making an introduction, stating that he will be the one who will become future “King”, Shoutmon proceeds to use his Soul Crusher attack against the Pteranomon. Witnessing this from a remote area, Jijimon, accompanied by Lilimon, is shocked that Shoutmon has been revived. Ballistamon, Shoutmon, Starmon and Pickmons attack the army with Rowdy Rocker, Heavy Speaker and Meteor Squall respectively and as a finisher, Shoutmon uses Rock Damashī, taking out the last Pteranomon.

Aggravated, Mad Leomon absorbs the data of various Digimon from the army, increasing in size, gaining armor and becoming equipped with a chainsaw in his right hand. He creates a fissure in the ground using the chainsaw, causing Ballistamon and Shoutmon to fall into it and threatens to kill both of them. Taiki runs towards them, saying that he can’t leave them behind, then the same voice from before instructs Taiki to use the Xros Loader and by shouting out “DigiXros”, the two Digimon unite becoming the incomplete top half of Shoutmon X3. Praising Taiki for achieving the legendary DigiXros , the power of which Mad Leomon is afraid of, Shoutmon X3 attacks him, destroying his chainsaw. After Shoutmon and Ballistamon separate, Taiki then does a Digi Xros wth Shoutmon, Starmon and Pickmons, attacking Mad Leomon with Star Blade, completely destroying his armor and causing him to return to his normal size.

A crack forms in the sky, creating a portal that sucks in Mad Leomon along with the remaining army Digimon. From an unknown area, Tactimon, the one who created the portal, had been watching them along with Lilithmon, Blastmon and Baalmon and says that once they see their next strategy, they will conquer Green Zone perfectly.

Shoutmon congratulates Taiki, saying that he is a "General", a legendary hero, and that he wishes to become "Digimon King". Shocked at the fact that Taiki does not know about Digimon, Shoutmon then states that they are in the Digital World, surprising the trio. A group of Monitamon who were spying on them report back to a mysterious girl named Nene. Directly above her is Kiriha, accompanied by Greymon and Mail Birdramon. 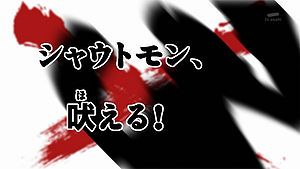 With Taiki's help, Shoutmon and the others were somehow able to drive away the Bagra Army from attacking. Whilst remaining in the Digital World, Taiki and the others go to the "Village of Smiles", a peaceful village where Shoutmon lives and is trying to protect. However, Taiki says that he will return to the Real World for the sake of both Akari and Zenjirou, then Shoutmon trys to stop him from doing so, but... 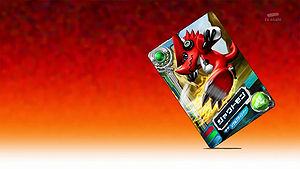