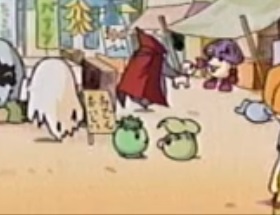 Leafmon is the partner of Ichijouji Ken. First appeared when Wormmon was reborn at Village of Beginnings. He also appeared when Paildramon or Imperialdramon lose so much power that Wormmon and V-mon are no longer able to maintain their Child forms.

A Leafmon is seen at Akiba Market.

Other Leafmon were seen at both Villages of Beginnings.

Leafmon appears when Wormmon is defeated and devolves. A non-playable Digimon.

Available as a collectable Digimon Card.

Available as a collectable Digimon Card.