From Wikimon
(Redirected from Kouichi)

Kimura Kouichi is an antagonist turned protagonist in Digimon Frontier.

Kouichi is a Chosen Child, though unlike the other Chosen Children who were chosen by Ofanimon, he was manipulated by Cherubimon and assigned the Legendary Spirits of Darkness. He is also the twin brother of Kouji. Kouichi is very shy, soft-spoken and withdrawn.

Kouichi is the firstborn of the twins, but they were separated when their parents divorced; Kouichi was taken by their mother, while Kouji was taken by their father. Each twin was told that the parents he was separated from was dead, and neither twin was told of his brother's existence. For a long time, Kouichi lived with his mother and maternal grandmother, knowing nothing of his younger twin brother. However, when his grandmother was on her deathbed, she told him of Kouji.

After this revelation, Kouichi tracked down his brother and spent an unknown period of time watching him from a distance, trying to get courage up to speak with him. Kouichi's mindset grew gradually darker over this time, as he felt unable to tell anyone of his conflict.

When Kouji received his message from Ofanimon, Kouichi was in the midst of following him. Kouichi boarded the train to Shibuya after him, and attempted to catch up with and talk to his brother, but he missed the elevator to the underground train station. Attempting to catch up with Kouji, he ran down the stairs, tripped and crashed at the bottom, which proved near-fatal. 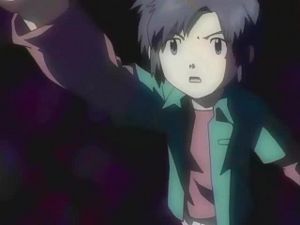 Kouichi's next memory was of a dark expanse, possibly the borders of the Digital World, where he was tormented by memories of his family and the dark thoughts that had been invading his mind. Cherubimon appeared and gave him the Corrupted Human Spirit of Darkness, changing him into Duskmon.

Kouichi forgot who he was and served Cherubimon as one of his warriors, though his relationship with the other four was obviously strained. He spent most of his time inside the Venus Rose castle and was known for staring at the moons in a thoughtful manner. Mercuremon often spoke of him disdainfully because of this.

Eventually prodded into battle by Mercuremon, he first appeared to the other Legendary Chosen by killing and scanning Arbormon's data. During a battle, Duskmon badly injured Garmmon, forcing him to change back into Kouji. When he heard Kouji's name, he began to remember who he really was and became greatly bothered by it overwhelming everything in darkness.

When he returned to Cherubimon, confused, Cherubimon told him that his father had betrayed him and his mother and that he could take revenge on Kouji for this. Cherubimon then gave him the Corrupted Beast Spirit of Darkness, turning him into Velgmon. Losing himself in the darkness again, he was released on the other Children. Ofanimon, working through Kouji's D-Scanner, managed to bring his memories back, but these were quickly twisted by Cherubimon. Velgmon, who was powerful enough to be a threat even to the Fusion Evolution Beowulfmon, seemed unstoppable. But working together, Takuya and Kouji managed to defeat him and took away the corrupted Spirits of Darkness.

Now back to his normal self, Kouichi was shy and ashamed for what he had done. When Cherubimon used an illusion of himself to attack the group, he offered Kouichi the chance to join him again, but Kouichi refused. It was then that the Spirits of Darkness were purified and returned to Kouichi, along with his D-Scanner. The Human Spirit of Darkness changed him into Löwemon and the Beast Spirit of Darkness changed him into Kaiser Leomon.

Kouichi continued to travel with the other Legendary Chosen, but soon noticed that there was something strange about him. When the Royal Knights first attacked them, Kouichi was the only one of the Children who remained conscious. Even when they were blown to the Digital World's blue moon, he was the only one whose DigiCode never appeared, and he never seemed to become injured. During their battle at Akiba Market, Lord Knightmon told him that this was because he had no data to reveal. Kouichi was simply a spirit pulled from its body, wandering in the Digital World. After hearing this, Kouichi became depressed, but made a point of not revealing this to the others, especially to Kouji. However, he made the younger twin promise that he will go visit their mother in the Real World.

In the battle against Lucemon Falldown Mode in the Dark Area, Löwemon moved between the Light and Dark orbs of the Dead or Alive technique in order to save the other Children. Kouichi was scanned by Lucemon, but was able to give his Spirits to Kouji beforehand, enabling Kouji and Takuya to evolve into Susanoomon.

As the others were returning to the Real World, Löwemon contacted Kouji through his D-Scanner to tell him that Kouichi was still alive. The moment they returned, the others rushed to find him, but his body had already been moved from the stairs in Shibuya Station. They hurried to the hospital, where Kouichi was in critical condition - his heart had stopped, and the doctors were attempting to revive him. The power of the D-Scanners managed to revive Kouichi, who woke up because a tear of Kouji's that hit his cheek.

When they returned to their lives, the brothers continued to bond with each other, and Kouichi reintroduced Kouji to their mother.

Digimon Frontier Original Story: Things That Want To Be Told[edit]