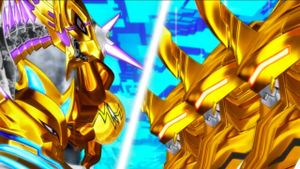 After Oozora Yujin reveals himself to be an android sent by Leviathan in "The Truth About Yujin ", he reveals his robotic arm with an inactive Appmon Chip of Deusmon. In "Launch! The Humanity Applification Plan ", Yujin uses Bootmon to activate his chip. After making the Appli Arise, Deusmon begins to destroy the AR-Field.