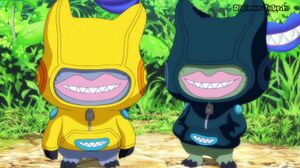 Kosomon lives on the Reviewmon Server. He explains to Karan Eri that his species is visually identical to Reviewmon. Kosomon says that he will give information about the whereabouts of Katsura Rei if the group will tell him gossips about Eri. They eagerly share some of their gossips about Eri which makes her upset. After that Kosomon tells anything he knows about Rei.