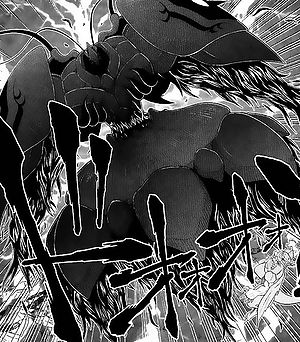 Eventually, Arkadimon loses a fight against Zeromaru. Neo intervenes, activating a Digimental. With this, Arkadimon's most powerful form is finally born.

In this new form, Arkadimon was able to destroy large areas of land and kill entire armies with single attacks. Unable to watch the massacre, Zero evolves to Ultimate and continues the fight against Arkadimon. At this point, after a suicide threat from his sister Rei, Neo loses his will to fight. Demon then returns and seizes control of his creation from the inside - transforming it into his new Super Ultimate body, ending Arkadimon's existence.

Arkadimon is the one of the main antagonists. It is a Digimon who was imprisoned in Underzero, then escaped and caused havoc in the Real World and EDEN as one of Mishima Ryuji's partner Digimon.

Arkadimon Super Ultimate evolves from Arkadimon Ultimate. It cannot be raised until the game has been completed.