The Seven Great Demon Lords (七大魔王 Nanadaimaou) are a group of Demon Lord type Digimon who each represent one of the seven deadly sins and are based on seven demons from Judeo-Christian mythology as well as elements and references to the epic poem Paradise Lost[1] by John Milton, The Lesser Key of Solomon[2] (Clavicula Salomonis Regis), a well known book in demonology, amongst other material.

Although the members of this group have appeared individually as antagonists throughout various series, there have been few occasions where a pivot story plot has been revolved about the entire group as a whole. For example, they are mentioned in Digimon Savers[3] and have been prominently portrayed together in later Digimon TCG media. They have been the main antagonists in Digimon Savers: Another Mission and Digimon Story. They are also referred to in a storyline promoting the Digimon Twin, whereby they secretly release a crack program (Tempest) into the Digital World, causing rampage as a consequence[4]. Currently, Leviamon and Lilithmon are the only two Demon Lords who have yet to make an appearance in the anime or the manga.

Each of the Seven Great Demon Lords has their own crest 「紋章 Monshou」. The center of each crest depicts one of the seals of the Seven Olympian Spirits, a group of seven mythological entities who, under God, ruled over the 196 provinces of Heaven and presided over the natural world for 490 years each[5]. They are mentioned in works such as the Arbatel de magia veterum and are each associated with a celestial body, which is also displayed on the crest directly above the Olympian Spirit seal, and corresponds to a particular sin. Within the space between the two concentric circles is text stating a designated Level; this is "666" for all the crests where "666" is the "Number of the Beast", a concept mentioned in the Book of Revelation, System; a demon that represents one of the Seven Great Demon Lords, and Code which identifies a sin associated with the aforementioned demon. At the bottom of the inner circle is text which specifies a caution for a Purgatory Level ranging between 1 and 7. 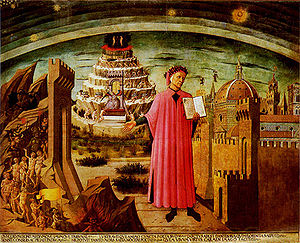 The Seven Great Demon Lords are listed here in order of ascending Purgatory Level. This ordering is a reference to seven levels of purgatory mentioned in the epic poem, the Divine Comedy (Divina Commedia) by Dante Alighieri. In the poem, each level represented a different one of the seven deadly sins and presented ways to atone for each sin. As a person progressed, they would eventually make it to the top of the "Mountain of Purgatory", reaching Paradise.[6]

The structure of the "Mountain of Purgatory" analogous to the Seven Great Demon Lords' Purgatory Levels is the following: