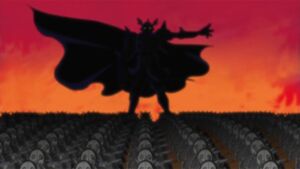 The Xros Wars (クロスウォーズ Kurosu Wōzu) is a conflict initiated by Bagramon in Digimon Xros Wars in order to put to the test the true potential of humans and comprehend if there is hope in the bonds between humans and Digimon in times when the natural evolution of Digimon had ceased to exist due to humans stop pursuing their dreams. On that purpose, Bagramon created the Xros Loader and gave them to a small portion of Chosen Children who possessed the Xros Code and would be able to perform the DigiXros.

Bagramon used to be a high-ranking Angel Digimon that brought up to Yggdrasill his concern after noticing the human feelings of despair were releasing more dark Digimon and affecting the balance of the Digital World, eventually being banished from the Realm of God before the multiversal deactivation of Yggdrasil in the universe of Digimon Savers.[1]