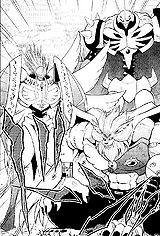 Leo evolves to this form to fight alongside Lord Holy Angemon against Neo and Demon's army.

Leo, as Regulumon, makes a cameo, alongside Gabou, as V-Tamer's Yagami Taichi explains to his Adventure: counterpart that they fought alongside the endless hordes of Virus Digimon and could do nothing but seal the polyhedron that caused them to appear. By the time he reappears after the polyhedron was destroyed, however, he's regressed to Leomon.