A Wrister (リスター, Risutā) is a small device shaped like a wristwatch that appears in Digimon Xros Wars which can be used to communicate with one another. 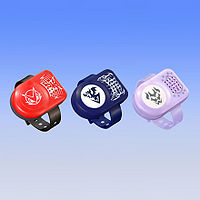 Xros Heart's Wristers were originally stored behind Ballistamon's speaker compartment and were later distributed among the group by Shoutmon. It was first put into practical use when Zenjirou was stranded at the top of a bamboo shoot that emerged from under the Village of Smiles. After performing a DigiXros on Starmons, with the addition of Rare Pickmon, forming the Rare Star Sword for the first time, Taiki used his Wrister to instruct Zenjirou to throw it into the light in order to defeat the Digimon beneath the ground to get rid of the bamboo shoots[1].

When Nene is captured by Lucemon Falldown Mode in the Heaven Zone, Taiki offered Sparrowmon a Wrister for a temporary alliance but refused to take it. However, by digixrosing into Shoutmon X5 and defeating Lucemon Satan Mode, saving Nene in the process, Sparrowmon later accepted it and officially joined Xros Heart.[2]