For the Digital Lifeform, see Whispered. 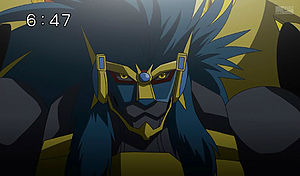 Apollomon is one of the seven Death Generals, ruling over Bright Land; his Apollomon Whispered persona was the true Death General, with the possessed Apollomon little more than a front without being aware of the fact. He was killed by Xros Heart and the Whispered program released his hold on Apollomon as he died.