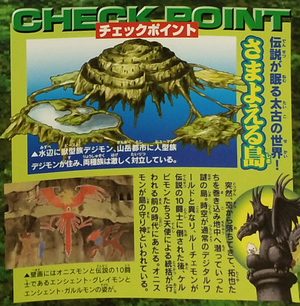 The island is shaped like a wheel and consists of a central, stepped landmass with five outlying sections connected to each other and the central section by thin bridges. The human shaped digimon and beast shaped digimon have their own villages on the far opposite sides of the island (which is surprisingly small). The central portion contains an ancient, crumbling ruin where Ornismon was sealed away.

Unlike the ordinary Digital World, the space-time is the time after Lucemon was defeated by the Warrior Ten, but before the Three Archangels were in charge too. Ornismon is known as the guardian deity of the island.[1]

The island also has the curious ability to pass through various points of the Digital World's structure, making it difficult to track, let alone get on or escape from. It has been shown to be able to phase through solid ground.

Somehow the old battle between human type Digimon and beast type Digimon had continued on this island even when it died out elsewhere in the Digital World. An ancient creature called Ornismon had also been sealed here by Ancient Greymon and Ancient Garurumon in the past. When Murmuxmon happened onto the island he took on the forms of Darcmon and Hippogriffomon to ensure that the battle between human and beast Digimon continued so he could harness their energy to revive Ornismon. During this is when the Legendary Chosen came onto the island and got caught up in the fighting.