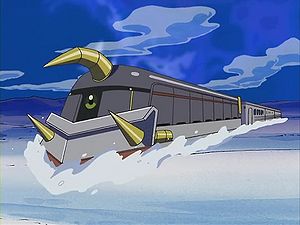 Trailmon Buffalo has been shown to have a boastful nature for a train. Within its first appearance in Episode 5, it makes no brake in wheels in trying to stop overhead and nearly runs over the Frontier gang. It is seen transporting the Forntier team to the Rose Terminal but left them short of passage to register itself as contestant into the Trail Festival. Thoughout Episode 18 it serves as the main competitor amongst all Trailmon, as it served under the operation of both Were Garurumon and Dogmon in the Trailmon Race. Buffalo's rider, Were Garurumon, appointed itself to being the Trail Rider; In return Buffalo showed a 'relief' from being by a Digimon and a 'something weak' in comparison to human. This Trailmon has a nature of demonstrating its winning speed at the extent of gravely endangering others of its kind and any other opposing his position.

It is one of the commonly seen Trailmon in the Dust Zone running its course for invaluable treasures in exchange for fuel.