I'll use this as a Sandbox, because my IP is banned for one day. 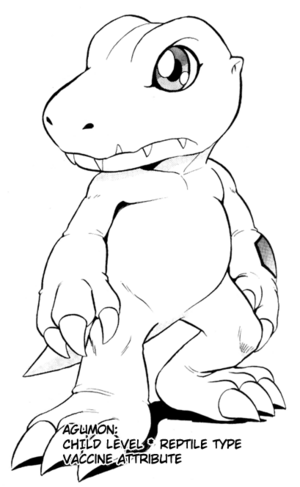 Picture of Agumon
Agumon is the Partner Digimon of Tatsuno Tsurugi in Digimon Next.

He started out as a Greymon in the manga, but, in a battle against Peckmon, Piximon De-Digivolved Greymon to Agumon. Later, he gains the ability of Digivolving into GeoGreymon, and after that, while fighting Kahara Shou and Yatagaramon,the ability of Digivolving into RiseGreymon When Tsurugi received the Digivice Twin R, RiseGreymon has digivolved into VictoryGreymon After the battle against Neo, he turned into stone and was reborn as a Digi-Egg.

He has a rivalry with Gaomon, he calls him dog and Gaomon returns by calling Agumon lizard. But they have also called each other brother. Their rivalry can be seen as a sibling rivalry