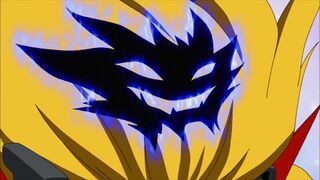 Whispered (ウィスパード Wisupādo) is a malicious program created by Dark Knightmon and implanted in Apollomon without his knowledge. It has the ability to take over its hosts data and overpower their personality, turning them into a warrior of evil against their will.

He is first appeared in Digimon S: Xros Wars and explains Team Samuel and Xros Heart about his existence as he converts himself into Apollomon Whispered. He was later killed by BEASTsDorbickmon only to be revived by Dark Knightmon as his DigiCore was still in Land of Prison Souls where the deceased evil Digimon are held imprisoned. As they were separated from Apollomon by using Forced Xros Open, he battle Apollomon in the Digital World while Dark Knightmon Forced DigiXros four Death Generals to form an incomplete Grand Generamon. He was finally defeated by Apollomon's Phoebus Blow as Dorbickmon's shadow merged with his new self only his sacrifice himself to infuse Samuel Nakaoka's Evolved Xros Loader which allows to DigiXros BEASTsDorbickmon with his own Xros Loader to form BEASTsDorbickmon Xros Mode.

However, he was revived by the original timeline Isaac and implanted the shrine maiden named Sayuri, turning her into Sakuya Whispered as his vengeance for his defeat of hands of Apollomon. When Sayuri urges Shiho and the others to stop Whispered, Whispered shows up in Sayuri's forehead and introduce himself to them. Whispered took over Sayuri's body and turned her body into a evil Digimon Sakuya Whispered.