Found the original page from years ago on my drive. It's probably still usable. 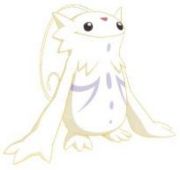 Digital Gnomes or DigiGnomes (デジノーム Dejinoomu) are glowing, fun-loving and mysterious creatures that were the first artificial lifeforms to be created, in 1980's, and are a separate form of life to Digimon, who evolved from the Digital World itself. They have the power to "grant wishes" by helping others with their strange powers to alter reality.

When the fledgling Digital World was attacked by the D-Reaper in 1990, the DigiGnomes were there to see it. In the year 200X, when the D-Reaper returned, awakened by the excess data created by Digimon evolution, Qinglongmon thought that evolution should be abandoned all together – and so he had the DigiGnomes transform the Shining Evolution, the source of power that allowed Digimon to evolve, to hide it from the D-Reaper. And so it became a Digimon – Culumon, who soon wound up in the Real World.

At the same time, however, the Digi-Gnomes were also putting their own plans in motion, using the evolution algorithm written by Shibumi of the Monster Makers to create Blue Cards in the real world, partnering Digimon with human beings. When Takato Matsuda discovered a Blue Card, which wound up transforming his card reader into a D-Ark Digivice, he tried to swipe a drawing of his self-created Digimon, Guilmon, though it - which created Guilmon.

Some time later, Culumon was captured by Makuramon and taken back to the Digital World. However, in transit, Culumon’s cage got stuck in the circuit-wall between the worlds – the DigiGnomes had seen to it, and then made Makuramon lose his grip on the cage, and freed Culumon.

When Culumon was wandering around the Digital World, and started playing with a Digital tumbleweed, some DigiGnomes appeared and flew along with him as he sang. But then, when his evolution powers activated, the light created drew the attention of Makuramon and Majiramon, scaring the DigiGnomes away.

When Ruki and Renamon were travelling through a forest, some DigiGnomes appeared. Renamon was able to tell Ruki what they were, and then, while Ruki waited for her to return with food, she wondered where she could find some water, and they led her to a river. They tried to warn her of a coming wave, but were too late, as she was swept away – only to be rescued by Culumon.

After being separated from the others by another Data Stream, Takato, Jianliang and Terriermon wound up on the water plain of the Digital World, where they encountered more DigiGnomes, who led them to Shibumi’s library. There, Shibumi explained to the trio about his involvement in the creation of Digimon, about the Blue Cards and about the DigiGnomes. The DigiGnomes themselves created a little holographic display, from which Shibumi interpreted Guilmon’s origins.

When Lee Shiuchon was pulled into the Digital World, she met Antiramon, and convinced her to play, running around on her back. As they did so, some DigiGnomes appeared, and they ran after them for kicks. Shortly after, when Takato, Jianliang and Terriermon arrived, the DigiGnomes appeared again and fluttered around them, but flew off towards Zhuqiaomon’s castle before Takato could ask them any questions.

Later, after the Tamers’ battle with Zhuqiaomon was interrupted by Qinglongmon, who then explained the true nature of the situation, and about their “true enemy,” the DigiGnomes arrived with Shibumi, who was able to tell the Tamers that “D-Reaper” was the true enemy’s name. After Culumon was rescued from the D-Reaper, the four Holy Beasts instructed him to release the light of the Shining Evolution. With aid from the DigiGnomes, who sacrificed themselves to make it possible, the light was shone all across the Digital World, causing many Digimon to evolve in preparation for the coming battles against the D-Reaper.

As the ark created by the Monster Makers was returning to the real world, Kenta discovered Marine Angemon and a Digivice in his pocket, and realised he was a Tamer. As Jianliang wondered how he had got in there, a single DigiGnome was seen outside the ark, flying away.

Some time later, after the D-Reaper had followed the kids back into the real world, while the final battle against it raged, the injured Impmon was being cared for by his Tamers, Ai and Makoto. As the three reconciled their differences, a Digivice appeared for them – and as they reached for it, outside of the bus they were on, a single DigiGnome flew away.

With the D-Reaper’s defeat, the children’s partner Digimon had to return to the Digital World, or they would be destroyed. Time passed, and things returned to normal... but then, one day, as Takato walked by Guilmon’s old hideaway in the park, a solitary DigiGnome appeared in the sky – it had granted Takato’s biggest wish, and the portal to the Digital World was open once more. As a consequence, the Tamers were reunited with their partners, and, months later, were caught up in a battle with many Parasimon. In the aftermath of that conflict, when Parasimon's victim, Grand Locomon, returned to the Digital World, some DigiGnomes were seen flying around.