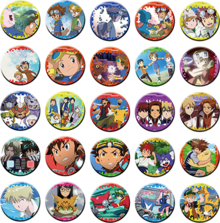 Digimon 20th Anniversary: Commemorative Can Badge (デジモン20周年記念 ドでか缶バッジ, Dejimon 20 shūnenkinen do Deka Kan Bajji), is a set of collectible can badges that features various Digimon characters from across the franchise, including the nine Digimon anime series: Adventure, Zero-Two, Tamers, Frontier, Savers, Xros Wars, Young Hunters, tri., and AppliMonsters. They were put on sale in the Digimon Universe 20th Anniversary Pop-up Shop at the Limited Base stores as part of the Digimon 20th Anniversary Project. Most of the anime series get 3 can badges, 4 total for Xros/Hunters, consisting of a nice selection of iconic images of each season with a digital motif around the edges of the badges. There are 25 badges total.